Just before The Great British Bake Off returns to our TV screens this week, three iconic previous Bake Off contestants visited the historic market town of Knaresborough this weekend to get a slice of the magic at England’s Oldest Tourist Attraction.

Helena Garcia, Michael Chakraverty and Priya O’Shea were contestants in the 2019 heat of the Great British Bake Off and have all remained friends since the show, meeting up for excursions and day trips around the country. This week, they ventured to the beautiful North Yorkshire town of Knaresborough for a potter along Waterside, a jaunt on the boats, and a trip to a pub. Topped off with a visit to the Adventure Playground and Petrifying Well at Mother Shipton’s. Luckily the weather kept off and the sun came out for them whilst Priya and Michael played on the see-saw. 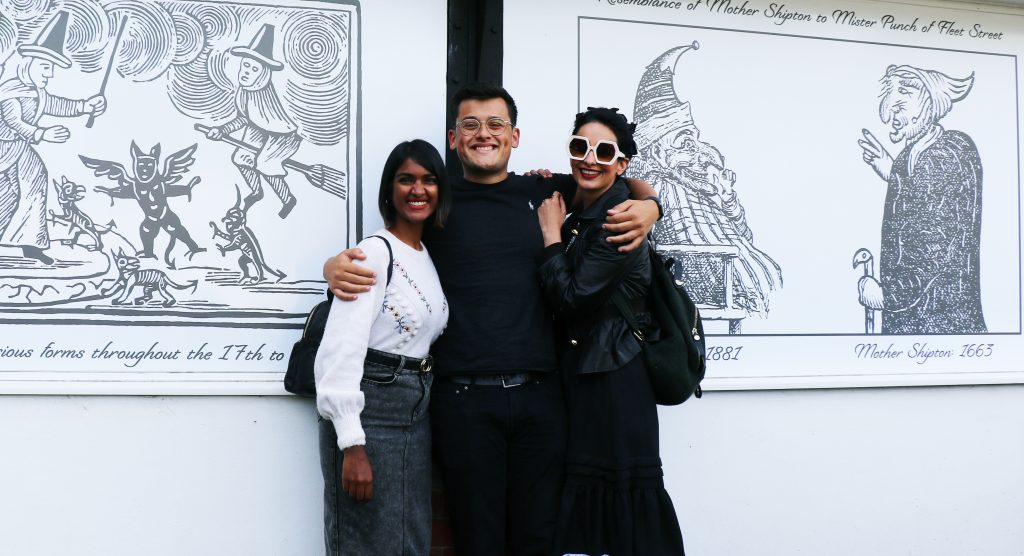 The Halloween-mad baker Helena Garcia, who made a storm on screen with gruesome bakes and ghoulish treats on the hit Channel 4 show, is a witch fanatic who knows the story of Mother Shipton very well. She regularly visits the cave, where the legendary prophetess Mother Shipton was said to have been born, and this time decided to bring her baker friends along for a visit. If only the bakers knew about the Wishing Well before their time on the show! 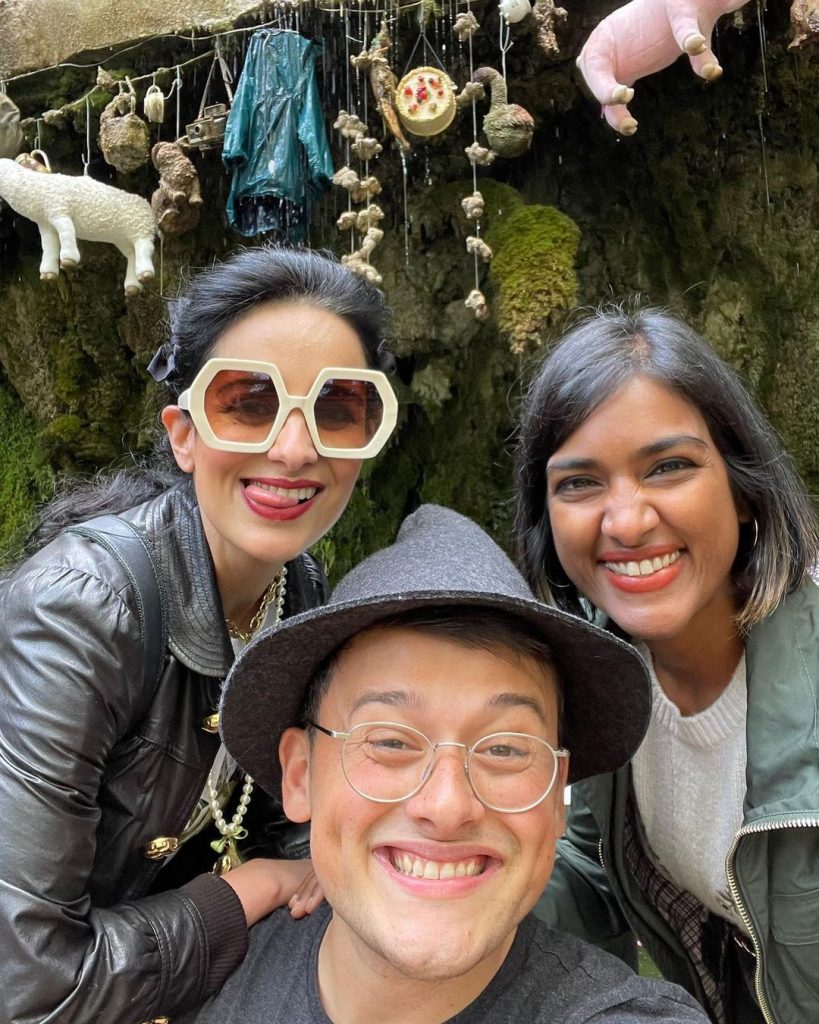 The team at Mother Shipton’s hung a selection of baking themed items from the Petrifying Well to celebrate the day and welcome the bakers, including a prop cake, a rolling pin, and an apron!

The incredible Petrifying Well is a fascinating geological phenomenon in which items hanging under the water turn to stone as if by magic, due to the unusually high mineral content in the water. The process is similar to that of a stalagmite or a stalactite, but much faster. A small teddy bear only takes 3-5 months to transform into stone! Visitors have been coming to see the well for centuries, and the park first opened as a paid attraction in 1630, making it England’s Oldest Paid Visitor Attraction. 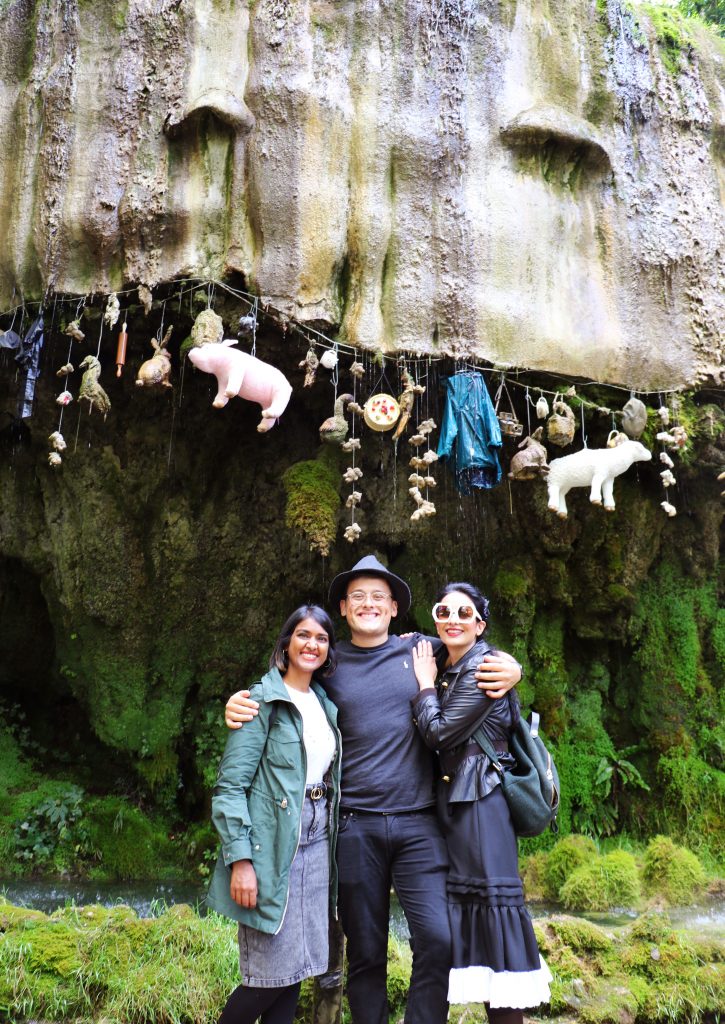 The cherry on top of the cake was that the bakers each left an item donation to be petrified from the well, which will be displayed in the museum once petrified. Helena left a witch’s hat, Michael left an official Bake Off timer, and Priya left a wooden baking spoon. They’ll soon have a soggy bottom!

The museum already houses donations including Queen Mary’s petrified shoe, John Wayne’s petrified hat, and Bobby Davro’s petrified sock. The Petrifying Well currently has other curious items hanging under the water, including a lambing coat donated by the Yorkshire Vet Peter Wright during a visit to the town on his anniversary with his wife Lin. Peter’s coat is already hanging pride of place from the well, with a stethoscope, a giant pig and a giant lamb! 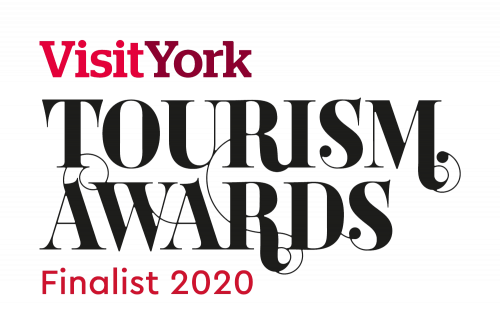 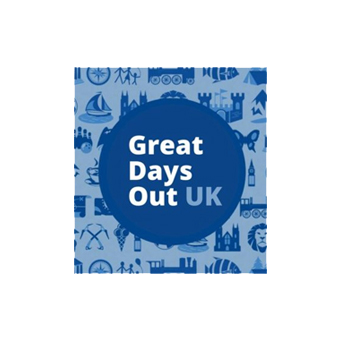